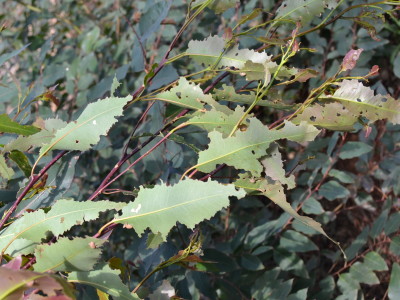 Greetings from sunny Sydney, everyone.

The Australian cricket season is almost finished and this is great because it means the AFL football season is just around the corner.  I have, yet again, very high expectations of my AFL team, the Fremantle Dockers.

I have some Thaumastocoris peregrinus news for you.

Thaumastocoris peregrinus is now in Italy! It has been found in large numbers on urban and commercial plantings of eucalypts around Rome.

In other news, I just thought I would flag some new papers on Thaumastocoris which have recently been published or are almost published, see below.

Nadel, R.L. and Noack, A.E. (2012). Current understanding of Thaumastocoris peregrinus in a quest for its management and control. International Journal of Pest Management. In press.

“Thaumastocoris peregrinus is a serious insect pest of Southern African and South American Eucalyptus plantations. Native to Australia, T. peregrinus was initially discovered infesting street, garden and amenity eucalypts in Sydney. With a host range of over 30 Eucalyptus species and hybrids this pest became established concurrently in both South Africa and Argentina, and has since spread at an extraordinary rate to neighbouring countries. In its native range T. peregrinus is distributed across several climatic regions in Australia. Basic biological data has been obtained on T. peregrinus although this has been limited by culturing difficulties in the laboratory. Monitoring of T. peregrinus populations has been conducted at the individual tree, tree stand and regional level to understand the population dynamics of the pest. Chemical control is effective in controlling T. peregrinus in an urban setting; however, biological control using Cleruchoides noackae is presently the main focus of control efforts at the international level. Three new species of Thaumastocoris are identified as potential pests, based on their geographical distribution and host range. Research into further understanding the biology of T. peregrinus and identifying other potential biological control agents are crucial for the management of present and future Thaumastocoris infestations.”

“Thaumastocoris peregrinus (Thaumastocoridae, Hemiptera) is a native Australian Eucalyptus sap- feeding insect that has become invasive and seriously damaging to commercially grown Eucalyptus in the Southern Hemisphere. Cleruchoides noackae (Mymaridae, Hymenoptera) was recently discovered as an egg parasitoid of the Thaumastocoridae in Australia. In 2008, C. noackae was collected in three regions of Australia in an effort to assess its potential as a biological control agent for T. peregrinus. Mitochondrial DNA (CO I) sequence diversity amongst 104 individuals from these native C. noackae populations revealed 24 sequence haplotypes. The CO I haplotypes of individuals collected from the Sydney and Southeast Queensland clustered in distinct groups, indicating limited spread of the insect between the regions. Individuals collected from Perth in Western Australia were represented by four CO I haplotypes. Although this population is geographically more isolated from other populations, two of CO I haplotypes were identical to haplotypes found in the Sydney region. The results suggest that C. noackae has recently been introduced into Perth, possibly from the Sydney area. The high mtDNA diversity and limited spread that is suggested for C. noackae is in contrast to the lack of geographic associated mtDNA diversity and extensive spread of T. peregrinus. If implemented as a biological control agent, this factor will need to be considered in collecting and releasing C. noackae.”